Most of the time I have a good hold on my hot Irish temper. It’s taken ages but I’ve managed to become pretty chill most of the time. I can usually channel anger into my writing or creative projects or the destruction of all goatheads.

All that control goes right out the window when I’m driving though. Thankfully, I live in a pretty safe town where you’re not likely to get shot when you flip out on the guy that cut you off. I take back roads to work each day to lessen my interaction with other drivers, try to road trip on weekdays to miss the weekend traffic, things like that.

When I was a kid there was a whole drive friendly campaign in the state of Texas. Commercials and signage reminded all Texans to be nice on the road. “We’re not like those folks from the other states,” the ads seemed to say. It was nice. I remember folks being so nice to each other as my folks and I criss-crossed the state on vacations each year. Y’all, those days are gone. And I think my temper and I are helping usher them out.

Today I totally lost it. I forgot all those drive friendly ads. I saw red and flipped out. I was on my normal two lane country road to work when the car in front of me started slowing down to turn. Now, I don’t know about where you’re from, but here in the Texas Panhandle, it’s an unwritten rule to pull to the shoulder if you’re turning right. It gets you out of the way of the other drivers. It’s just a nice thing to do.

Well Mr. Turn Signal apparently didn’t know that rule because he slowed to an complete stop to turn in the east bound lane. I couldn’t pass because of oncoming traffic so I slowed down too. Here’s where the rage comes into play. I was fine with his behavior. It was rude but I was keeping my cool. He turned, I sped up, all was good. For about 5 seconds. Then the asshat behind me decided that I wasn’t speeding up enough and passed me, on the shoulder. And as he was passing me, he did the universal gesture for frustration – he raised his arms at me and looked at me like I was a moron.

That was the moment my temper took control. In my head I heard “hold on, I got this” as my sanity waved goodbye and Temper took charge. I hit the horn. I flipped him off. I yelled “Oh you did not just do that.” It was a lovely display of blind rage. I then sped up, tailgated him for a bit then passed him. “And you stay behind me,” Temper said as he slid by. He looked scared. Pretty sure he thought I was coming after him with a gun.

I’m not proud. My temper totally would have gotten me shot or arrested in a larger city. But I do feel much better now. And I’m sure Mr. Asshat will be a much nicer driver for the next few days.

On a lighter, less ragey note, below is a picture of my goat George. He’s a moron. Lovely and sweet but dumber than a box of rocks. 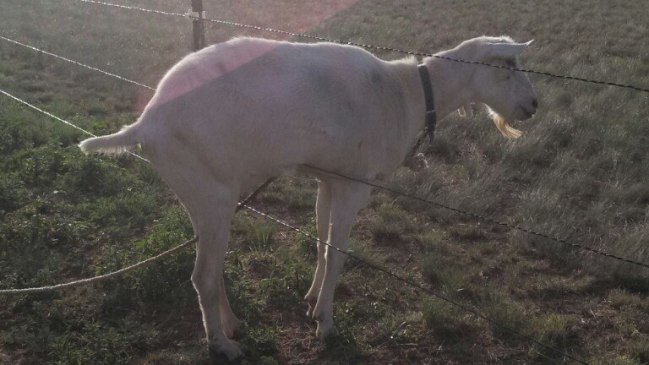