That is what the last 30 days have been in my world. The unexpected. It started with this guy. 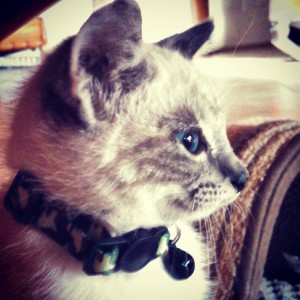 That adorable ball of fur up there is my new kitten, Finnegan Ozeransky or just Finn. I have neighbors who spend most of the summers traveling. They’re great people so I watch over their place for them when they’re gone, cleaning up storm damage, picking up the mail and paper, etc. I’d just finished mowing for them when, later in the evening, I heard a faint meow. I followed the sound to their back porch and found a starving, beat up kitten. I’d intended to get him healthy and find him a home. But this happened. 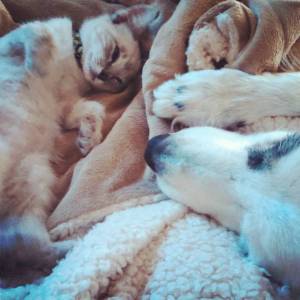 My dog Ice fell in love with him. So now instead of rehoming Finn I’m keeping him. I wasn’t looking for another cat. I didn’t need another cat. But as my friend M pointed out, Finn may have needed us. And clearly Ice needed him.

My next bit of unexpected wasn’t so fun. Or so cute. 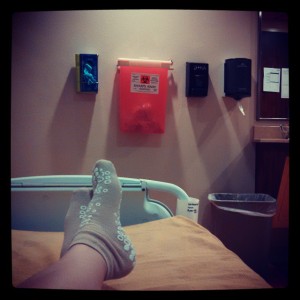 At least I’d shaved my legs.

Yup. I landed in the hospital. Right before my employer supplied insurance ended (more on that in a later post) my left kidney though tossing out a monster kidney stone would be fun. So five days before I lost my insurance I used it more than I ever had. And after an accident prone 38 years on this planet I made my first ever trip to the Emergency Room. Fun times. I do have to say, I was deeply impressed by the staff of our local ER. They took one look at me and put me in a room, put me on an IV, and pumped me full of pain meds. I wrote down every person’s name. I’ll either name children or characters after them all one day. Thankfully they got me stable and had a bed upstairs for me. So I spent the night in the hospital and had surgery the next day to pull the 8mm stone out in pieces. For those of you not familiar with kidney stones, mine was just under an inch. Not a record breaker but horribly painful none the less. So unexpected event number two cost me big time. Lost work, lost pay, plus medical bills that, after insurance, add up to more than the contents of my checking account. Yikes.

After that were several little unexpected moments. Like my boss forbidding me to come to work after my surgery and then offering to drive me home when I did come to work and only made it two hours before the pain got too much to bear. (She’s a gem, that boss of mine.) If you ever have surgery for a kidney stone, just trust me when I say that the recovery is almost as rough as the stone itself. Another unexpected moment came as a care package brought to me as I was leaving the hospital.

Spare marbles, in case I lose mine. It happens sometimes.

I also got a coloring book and a Coke from Sonic. I have some seriously awesome friends. I always knew that but getting suddenly sick reminded me that I’m very blessed. I got lots of texts and Facebook messages from folks offering love, hugs, and prayers.

My last bit of unexpected happened just the other day. A friend (and former professor of mine from grad school) got in touch, asking if she could use an essay I wrote in a textbook she’s working on. Of course I agreed. It is a huge honor. Something I wrote in textbook, to be studied by folks. It’s pretty amazing. (In case you’re wondering, the essay she’ll be using can be read here: Grandfather.)

It was a crazy 30 days. I wouldn’t recommend some parts of it. I certainly hope to never repeat that kidney stone part. But all in all I wouldn’t trade them for anything. 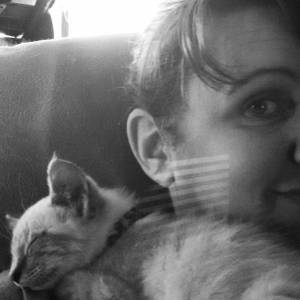 I hope your last 30 days have been less eventful than mine. And that you have something as loving and precious has Finn in your life.